SYDNEY, 30 March 2017 – Epson is expanding its lineup of industrial SCARA (selective compliance assembly robot arm) robots with the launch of its new T series of robots that will offer a low total cost of ownership (TCO). The T3, the first product in the T series, will be released in limited markets beginning in late March, with a gradual rollout in other regions to follow. 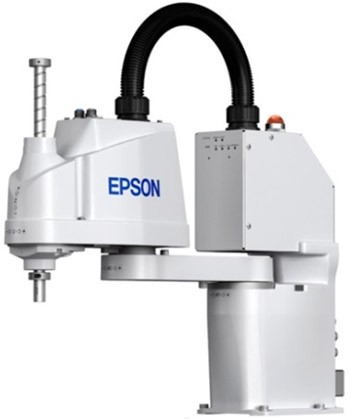 The T3 is designed primarily for simple material handling applications, such as test machine loading/ unloading. It provides companies with the opportunity to free operators from repetitive and non-creative tasks such as transporting components, which to date had not been performed by robots due to financial concerns. Manufacturers who automate tasks by combining multiple low-cost single-axis robots will find that they can replace these with T3 robots. Doing so will enable them to reduce or eliminate troublesome single-axis robot maintenance work and save money over the long run. Deploying T3 robots will enable factory owners to free up space that was taken up by a large number of robots and use their floor space more efficiently and productively.

1Compared with an Epson LS3 SCARA robot and RC90 controller. 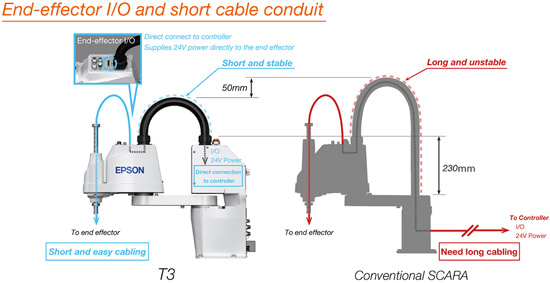 For additional information about Epson robots go to: http://global.epson.com/innovation/core_technology/robotics.html

C4-Series
EPSON C4 6-axis robots are the latest in the lineup of C-Series 6-axis models. With best in class cycle times, precision and motion range, EPSON C4 robots are leading the industry for compact 6-axis robot applications. EPSON C4 arms have the same unique SlimLine design as the C3 that allows the arms to reach into confined/restricted workspaces from many angles with smooth motion not achievable with competitive models. The slimline body and compact wrist of the C4 enables great motion range and less mechanical restrictions making C4 robots the most compact and flexible robots in the market today. Also with the C4, the maximum payload is now up to 4kg and we also added a 900mm model which opens more possibilities, and more applications for EPSON C4-Series Robots.

Epson G3 robots lead the industry with best in class cycle time, precision and motion range. With over 30 models available in sizes from 250-300mm, EPSON G3 robots are the robot of choice for high precision, high speed applications where performance AND low cost are required. G3 SCARA robots are ideal for applications such as hard drive assembly, lab automation, electronics assembly, medical device assembly, photonics, semiconductor, telecommunications, solar, and many others.

Unique to the G-Series, is the new curved arm option which allows G3 arms to be purchased as right or left curved models to maximize work envelope usage while maintaining small workspace usage overall. G3 arms are available in 250, 300 and 350mm arm lengths and come with 150mm (120 clean) Z-Axis lengths. They are also available in table top, wall or ceiling mount configurations as well as Clean/ESD configurations.

Motion Solutions Australia will be exhibiting the EPSON six axis robot C4 with RC 700 controller and the EPSON G3-351 with RC180 controller integrated with Vision and Vibratory Feeder at the upcoming National Manufacturing Week, 9 – 12 May 2017, at the Melbourne Convention and Exhibition Centre on stand #2722.

About Epson and Epson Australia
Epson is a global technology leader dedicated to connecting people, things and information with its original efficient, compact and precision technologies. With a lineup that ranges from inkjet printers and digital printing systems to 3LCD projectors, smart glasses, sensing systems and industrial robots, the company is focused on driving innovations and exceeding customer expectations in inkjet, visual communications, wearables and robotics. Led by the Japan-based Seiko Epson Corporation, the Epson Group comprises more than 67,000 employees in 90 companies around the world, and is proud of its contributions to the communities in which it operates and its ongoing efforts to reduce environmental impacts.

Epson Australia offers an extensive array of award-winning image capture and image output products for the commercial, industrial, consumer, business, photography and graphic arts markets, and is also a leading supplier of value-added point-of-sale (POS) solutions for the retail market. Epson is the market leader in Australia and worldwide in sales of projectors for the home, office and education. Established in 1983 Epson Australia is headquartered in North Ryde NSW and is a subsidiary of the Epson Group headquartered in Japan.
www.epson.com.au