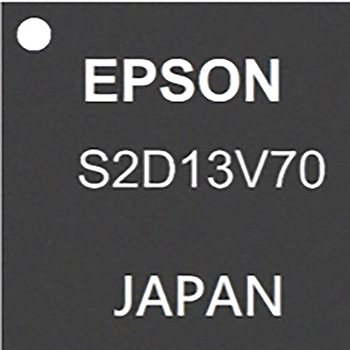 Both eDP and OpenLDI are interface standards for transmitting video signals to displays, but eDP supports higher resolution video and faster speeds than the more widely used OpenLDI.

To address this issue in in-vehicle systems development, Epson developed the S2D13V70, an interface conversion IC that supports automotive standards. The new product satisfies the strict quality requirements of the automotive industry. It is compliant with AEC-Q1002 and operates at temperatures up to 105℃.

The conversion IC is also equipped with safety functions required for automotive systems. For example, a CRC function monitors whether video signals output from an ECU are being properly received, and the IC supports the design of dual-display instrument clusters, with a splitter function that splits and outputs video signals on two displays.

1 Electronic control unit (ECU)
Any of various units that use electronic circuity to control a system, usually in a vehicle. Numerous ECUs are found in vehicles, where they control systems such as engines, brakes, and car navigation systems.