Sydney, 27 March 2019 – Ahead of their appearance in stores next week, I had a chance to spend some time one of the new Epson 4K PRO-UHD home theatre projectors. Accompanying the projector was Paul Haddad, the Epson product manager responsible for this unit. He was able to fill me in on some of the details.

Three new projectors from Epson, all “crafted to a level” as it was nicely put to us at the Sydney launch, that level being under a $5000 price point for what the company calls ‘4K PRO-UHD’ projection. 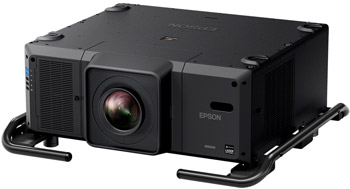 Created in 1953, the iF Design Award is recognised around the world as one of the most prestigious awards for innovative industrial product design excellence. Products are evaluated based on a wide range of criteria, including practicability, workmanship, consideration of environmental standards, degree of elaboration and innovation, functionality, usability, safety, aesthetics, and universal design. This year's winners were selected from more than 5,500 entries from 59 countries by a 58-member jury comprised of experts from around the world.

Epson today announced that two of its projectors had been recognized in the Japanese 2012 Good Design Awards. The EB-480T and EB-485WT projectors (Australian equivalent models, EB-480 and EB-485W) were commended for their contribution to lifestyle enriching design.

This wall-mounted short-throw projector is designed for educational institutions, and contains annotation tools that enable it to be used as an electronic blackboard.

‘It’s under $4000, yet Epson’s range-topping projector offers 3D, wireless HDMI and a three-year warranty. It is, frankly, incredible…’

APC Review: 3D as big as you could want: Epson EH-TW6000W review

For those who need to turn an entire wall into a 3D TV. These days just about every living room sports a massive flat panel 3D TV thanks to absurdly affordable prices.

Instantly setting the TW6000W apart from the pack is the ‘W’ concluding its name. It stands for wireless, and refers to the Wireless HD Transmitter that complements the 3D projector. With the transmitter, installation is a cinch as it feeds info — 2D and 3D — wirelessly to the projector. 3D is taken care of with its 2200 lumen bulb, 480Hz frame rate, a high contrast ratio of 40,000:1, 1080p Full HD projecting and split screen 2D viewing. The TW6000W

For 3D, the EH-TW6000W supports the latest cross-talk reducing 480Hz technology and does well with Avatar and Pirates of the Caribbean.

A full-HD 3D projector, with wireless HDMI, from a top name in projection, for $2,799 AUD ? This new Epson jumps several generations.

BluRay playback is astonishingly clear as is streamed video via the Boxee’s HDMI output...